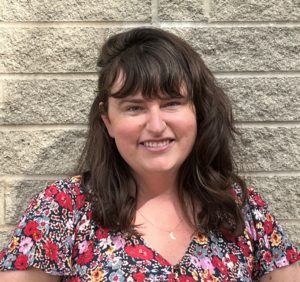 Melanie Grue has been working at ELC at NKU since the end of May 2022. She began working with young children nearly 20 years ago when she received her B.A. in Child Psychology from Metropolitan State University in Saint Paul, MN. From there, she began working as a lead teacher at Dodge Nature Preschool, an outdoor based preschool at a nature center in a Saint Paul suburb. They were afforded many opportunities at Dodge to pursue professional development and Melanie was able to present at the National Association for the Education of Young Children conference. Dodge greatly influenced her as a teacher and she carries with her the love of connecting children with the outdoors ever since.

Melanie is a born and raised Minnesotan and is working on making Cincinnati her home while her partner pursues his graduate degree at the University of Cincinnati. She was raised in a small farm town in Minnesota and was very much a country kid, but has grown to love being in a city for its diversity and own special beauty. And of course, plentiful dining opportunities.